The research behind Avant-Garden

The landscape architect Endre Vik has met all challenges like avant-gardes during his professional life. The climatic conditions in Norway have given him a continuous challenge and he has met these challenges with a scientific approach. This is why the relationship between the plants culturing conditions and their immune defence system is of great interest to him. To improve the growth of certain plants in rough weather and during harsh conditions, he invented an organic soil has met with scientific recognition and has been highly appreciated for its ability to increase the crop. Several experiments performed at the Norwegian University for Life Sciences have scientifically documented this. The soil has met with approval by the Norwegian Authority for Ecological Culture. Plants grown in this soil increase their content of chlorophyll and carotenoids, which represent fundamental and important components in the plants immune system and in our own.

Only plants can synthesize the bioactive components that we are so dependent on and they are vital to our own immune system.

How can plants improve the immune system ?

This is a basic concept and a reason why food and nutritional experts at WHO and UN strongly recommend an increase in the amount in the amount of vegetables and fruit we eat daily. This would reduce coronary and heart related diseases, cancers and other illnesses by 70% it is estimated. When Endre Vik saw his results, he made a link between plants and the human immune system and as a result, he took the initiative to examine this further. He contacted the Norwegian Authority for Ecological Culture to organise a cross sectional seminar with participants from all over Europe specialised in medicine, pharmacy, nutrition and plant physiology. The seminar took place at Ås in Norway June 1 1999 and was organised by the Norwegian University for Life Sciences, the Norwegian Institute of Plant Research and the Norwegian Research Council. In his presentation Endre Vik announced that he had obtained a patent for his product, Avant-Garden, and he presented his view about similarities between the behaviour of plant and human defence systems. He explained the plants bioactive ingredients as equivalent to the human defence system and the way the systems are working, this turned out to be quite a revolutionary discovery with tremendous consequences, which will now be available to everybody as the product Avant-Garden.

Avant-Garden is not a replacement of “5-a-day” but an addition, a balanced food supplement.

What is Avant-Garden doing to the virus ? Trapping it !

Both in the plants and within us, the immune systems are constantly at work to protect the host from harmful micro organisms. It all starts by identification of the intruding micro organism, then attacking and destroying it. This very complex procedure needs to receive the correct nutrition and energy to stay on the alert. It is here that the plants come into picture (vegetables and fruit) with their bio active substances. Amongst other things these substances help mobilise the complement system which non-specifically dismantle bacteria and viruses. In order for the complement system to be efficient, you need a daily refill of the appropriate substances. It is here Avant-Garden comes in. In addition, Avant-Garden is also a very strong antioxidant.

This figure can illustrate just any virus with the protein envelope and the structures that will attach to the cell that the virus is trying to infect.

The complement system of our immune system triggers via the lectins path. Plants that are components of Avant-Garden contain potent lectins. In humans, lectins are stored in the liver, the brain, the spleen, kidneys, intestines and the gametes.
Further, patients who have been through cytotoxin/radiation treatments have reduced levels of lectins. This suggests that the addition of lectins present in Avant-Garden can improve the effect of the treatments and reduce the need for antibiotics. From time to time, we hear of people surviving the most severe illnesses, only to be troubled with something quite different, like pneumonia, and die of that rather than the cancer or what else they suffered from. Avant-Garden strengthens both the non-specific front line defence of the skin and the mucous membranes, which is where the infection often starts, but also the more specific defence mechanisms. This was what Endre Vik discovered when he realised that the plants had their own immune system in 1992, had it verified in the human immune system in 1995 and received acknowledgements for his findings in 1997.

Results from a Clinical Study 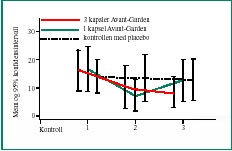 This diagram illustrates the reduction in events of common colds in a Clinical Study with 90 medical students performed at the Institute of Microbiology and Immunology at the Haukeland University Hospital, University of Bergen, Norway. The effect of Avant-Garden was studied in 17 different blood analyses. The group that received placebo tablets had colds throughout the 3 months testing period, whereas the students that took 1 tablet of Avant-Garden each day had a reduction in the number of colds the first month but an increase during the next month. This is probably due to exposure of more viruses in the environment.

However, in the group that took 3 tablets of Avant-Garden daily, there is a clear and significant decline in the number of colds that they contracted during the 3 months.

Today it is equally important to demonstrate that a food supplement improves the immune functions, as it is to show that it is not harmful by inducing allergic reactions or other adverse effects. The chemical analyses at Haukeland University Hospital in Bergen proved that there is no risk taking the Avant-Garden tablets.
Persons that have had organ transplants, as kidney and heart must always consult their surgeon or doctor, because a stronger immune system can interfere with the immune suppressive medication these persons take to prevent rejection of their transplanted organs.

During the time from the invention of Avant-Garden until today a considerable number of persons have taken Avant-Garden over longer time periods and have got rid of illnesses and various infections and symptoms such as influenza, colds, sickness, recurrent herpes wounds, bronchitis and pneumonia.

Herpes simplex is a very common virus, approx. 90% of the world’s population have had this infection and are carriers of the virus. For some persons reactivation of their Herpes virus causes serious problems with pain and open wounds in the face, in the mouth and on other parts of the body.
Avant-Garden firstly reduces the wounds and after some time it prevents the reactivation. The condition of the skin improves due to pigmentation from the ingredients in Avant-Garden and as a result, you will be able to take the sun easier. The hair and nails gets stronger. Insect bites get milder and less itchy. Endre Vik himself has got rid of an arthritis that was the result from cold and draughty rooms during the time as a student. For everybody with a reduced immune system, Avant-Garden and the non-specific complement system will protect against fungus infections such as Candida and urinary infections.

It probably tells us more than anything else that Avant-Garden is a natural product to build up a healthy body full of vitality and energy, a product for general feeling of well being, by a daily intake as a natural addition to your diet.

Avant-Garden will not be a substitute for the “5 – a – day” but an addition to, and as such a balancing food supplement for important functions in life.

Take up to 3-4 tablets for every breakfast together with some fat like cod liver oil, omega-3 capsules, olive oil, rape seed oil or seal oil. At times of ongoing infection (colds, Herpes etc.) take additional 2-3 tablets for dinner.

When the infection is over you can return to your ordinary daily dose of Avant-Garden.

Children may have 1 tablet of Avant-Garden for each 20 kg. of body weight. In case of an active ongoing infection, use the same dose for dinner too. When the infection is over you may return to the usual dose. To avoid the danger of suffocation it is best to crush the tablet with a tablespoon and mix it in the child’s food.

Professor Birgitta Åsjø at the University of Bergen, Norway says:”Avant-Garden is a sensational preventive product !” She is leader of the Norwegian Competence Centre for HIV & AIDS and is one of the world’s leading specialists on viruses. 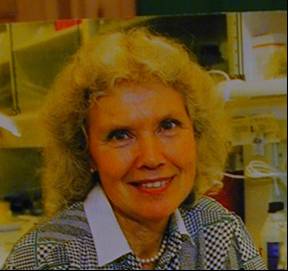